Ankle surgery: all is well 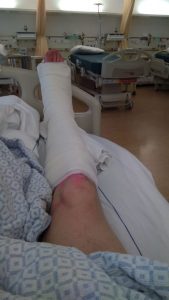 I doubted for a long time whether I would have the surgery performed. About the surgery itself, but especially against the long rehabilitation process. But the pain came faster and faster and became more intense. All this in a period of about 25 years. I have been able to exercise for a long time with this injury. I played badminton competition in Germany for a long time. There I noticed after competitions that the pain occurred earlier and lasted longer. That is why I stopped badminton and switched to tennis. But even with tennis, which is less intense, I noticed over the years that the pain got worse until tennis was no longer possible. That is now 5 years ago. So in the end I made the decision: surgery.

There was heavy damage in my ankle joint. The cartilage was so damaged that it no longer gave the necessary protection and thus caused pain. The solution that the doctor offered was to fix my ankle joint by means of 2 screws, Arthrodesis.

And so it happened. The surgery went extremely smoothly. In the morning going to the hospital, surgery, same afternoon the hospital out again. The first two days the pain with dampened with medication well. After that no painkillers needed. 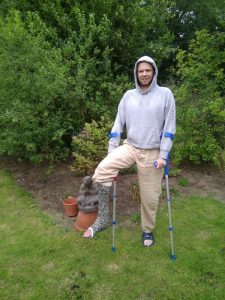 The punchy part of the intervention is mainly in the length of the rehabilitation. It will take months. In the first six weeks, my foot is in the plaster and the foot must be kept high. The foot cannot be charged. After this period I get new plaster and I may carefully use the foot. Again this period six weeks in the plaster. If everything goes well, I can continue with the next phase of rehabilitation. This will consist of physiotherapy at Sportmedisch Centrum Papendal.

In that time I will build my muscles calmly and also increase the bone density. That part of the recovery period will also take several months. In order to be full again, the term of a year is set.

The first weeks I have are done now. All goes well. I expect to be able to take care of the Personal Training again half / end of September. Until that time I would like to answer your questions about healthy food and lifestyle. Until then, Mika and Jan will take over my sessions as much as possible.